The ground-coupled heat exchanger works on some fairly simple principles. It uses the ground’s greater insulation capacity to warm outside air during the winter, and to cool it down in the summer, before transferring it into the house.

Buried below the frost line at a depth of approx 2 meters, this 30 to 40 meter-long pipe enables air to be transferred by using the thermal mass of the ground to maintain an average temperature of approximately 10 degrees Celsius throughout the year.

How efficient is this system?

The first problem that can occur with this type of system is that mold can form in the pipe. Canadian summers are hot and humid when the air first enters the cold pipes of the heat exchanger, resulting in significant amounts of condensation. The pipes are often full of dust and mold, and the pipes transmit this air directly into your home. That’s why it is highly recommended that you simply shut off the system during the summer.

If work is carried out properly, the heat exchanger allows you to warm the outside air temperature by approximately 7 degrees Celsius during the winter, and to lower the outside air temperature by about seven degrees Celsius in the summer. If, during the cold season, your system takes the air outside your house at -25 degrees and sends it into your house at -18, you will agree with us that it’s not enough on its own. This system will never be your sole source of heating with the winters that we experience in Quebec.

Moreover, in the fall and spring, this system is unnecessary. During these two seasons, the air is typically warmer than the ground, so the system would cool the air rather than warming it.

A ground-coupled heat exchanger must comply with a wide range of criteria in order to be healthy and functional. Here are some of them:

You should pay a minimum of $3,000 for your ground-coupled heat exchanger. Below this price level, the hardware may be ineffective. 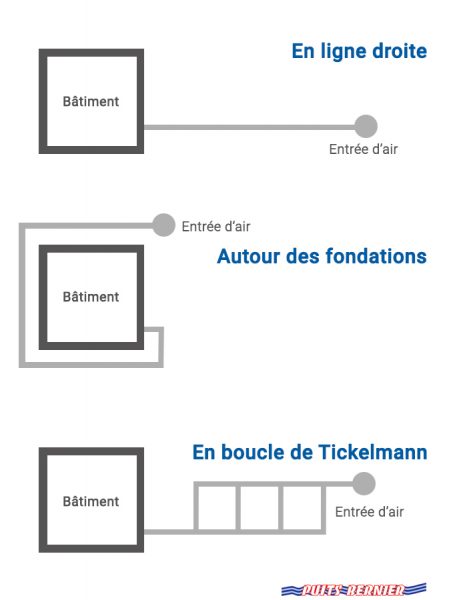 We strongly suggest the geothermal instead. If you have any questions, please don’t hesitate to get in touch.